Hereford Cantabile had a ball at Llangollen with two days of singing and socialising, and a trophy to bring home having won the Childrens Folk Choir competition. They were also the highest placed British choir in the Senior Children’s Choir coming fourth to choirs from Canada, the Czech Republic and the USA.

“Well done girls and Laurence and thank you. So proud of you all and many congratulations to our wonderful Canadian friends.”

Their new friends from the St Collen’s Concert – Canadian Shallowly Newfoundland & Labrador Youth – had the winning score for the Senior Childrens Choir class which was the highest score overall and gave them the Choir of the World title too.

Cantabile’s festival started with the fabulous St Collen’s concert where we were treated to two world class performances from the two very different choirs –  both were simply awesome! We also got to see the hoodies for the girls from the HCS PTA for the first time which looked fab.

The opening ceremony and royal visit followed, both full of colour and enthusiastic cheering. Then in the evening the ‘Heart of Llangollen’ Concert had Charlotte and Emily, who are sadly leaving this year, carrying the Union Jack in the Ceremony of Nations. Terry Waite’s following address emphasised the importance of music in creating harmony with ourselves and with our neighbours. Cantabile’s two songs ‘The Butterfly’ and ‘Hava Nagela’ echoed those sentiments beautifully.

Early on Wednesday morning they were the second of fourteen choirs to compete in the Senior Children’s Choir just after 9:00 am. They impressed the judges with ‘The Skylark’ and ‘Johnny Says No!’ commenting they were “technically wonderful … fantastic dynamics and pianissimo …wonderful tuning and flexible singing …”.

Naturally Laurence was superb in both classes but seemed very taken with his role as Johnny!

You can watch highlights from Tuesday and Wednesday on S4C Welsh TV (click ‘S’ on bar for English subtitles):

You can also watch all the choirs’ singing on Llangollen TV.  See if you agree with the difficult decisions the panel of judges had to make!

The scores are all published on the official Llangollen Eisteddfod website:

This year Cantabile are greatly honoured to have been asked to perform in the Heart of Llangollen concert on Tuesday evening which is “a feast of music and dance from the best of the Eisteddfod’s international competitors” and “will also include the official opening ceremony, Procession of Nations and the annual International Message of Peace.”

But that’s not the only event for them on Tuesday  – it will follow the the spectacular opening parade through the town which Cantabile will also be taking part in after their lunchtime concert with Shallaway Newfoundland & Labrador Youth (Canada) in St Collens Church at 1 pm.

It’s a fantastic chance to meet old friends and new and soak up the unique atmosphere that this Welsh international celebration of music creates.

The two clips below show the Cantabile competition performances in 2014:

2015 looks set to be an exciting year for the choir.

Fantastically they have reached the semi-final of the BBC Songs of Praise School Choir of the Year for the third year in a row.

For some of the girls this will be their fourth appearance on the show; for others their first but they will all be very thankful for the time and encouragement given by Mrs Williamson, Mr Lane and Mrs Cuthbert to help them achieve this.

The semi-final and finals for the Junior and Senior Choirs will be filmed in Nottingham in March this year and details for free tickets will be published on the BBC website in due course.

In 2015 they would love to replicate their 2014 feat in helping to raise thousands of pounds for local charities at their Concerts at Christchurch in Malvern for ARCOS SMILE and the Military Charities Concert (ABF, TRBLand SSAFA) at Hereford Cathedral with the The British Police Symphony Orchestra. A huge thank you to everyone who helped to make these events such a success.

They are looking forward to sharing the discovery of unfamiliar as well as familiar favourites with their audiences this year. Christmas showed exactly how hard existing and new members have been working to consolidate and extend their already significant repertoire so their audiences will be in for a treat.

Dates to put in your diary for 2015 so far include: 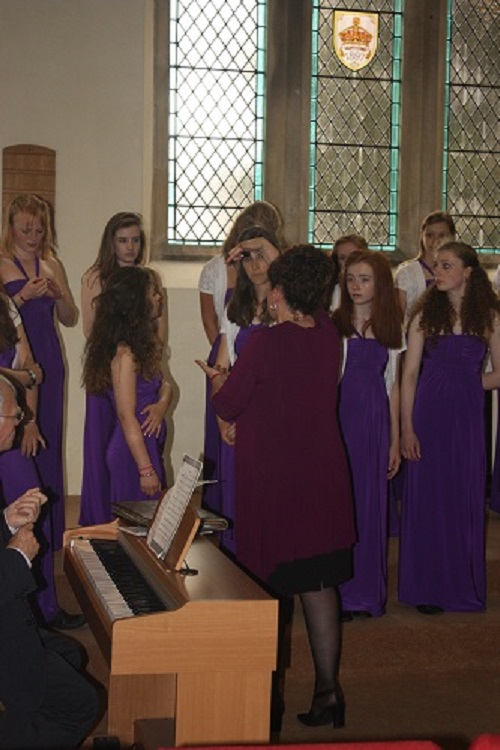 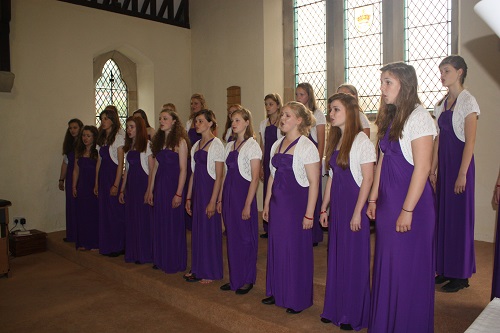 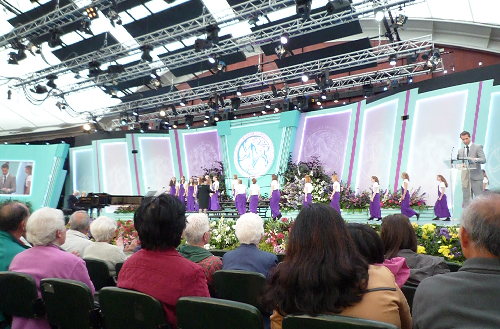 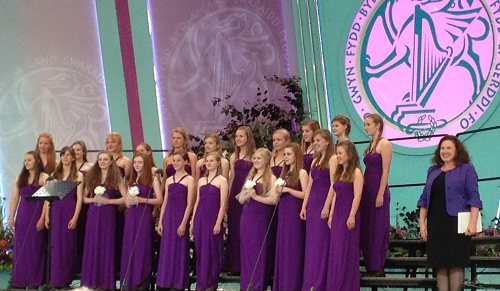 Great reaction to their performance of Bobby Shaftoe 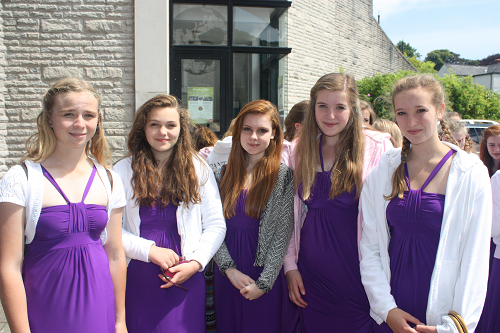 Relaxing after their performances 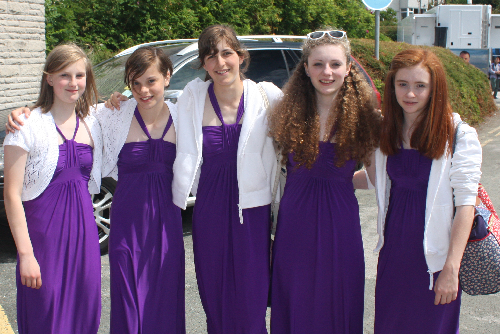 Loving the sunshine and keeping their fingers crossed … 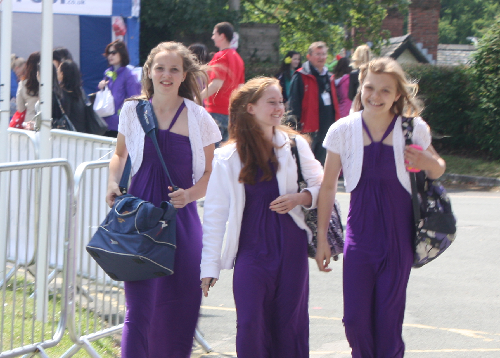 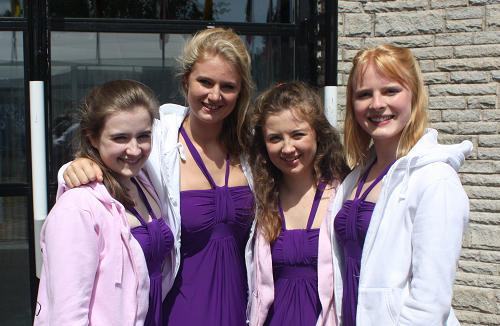 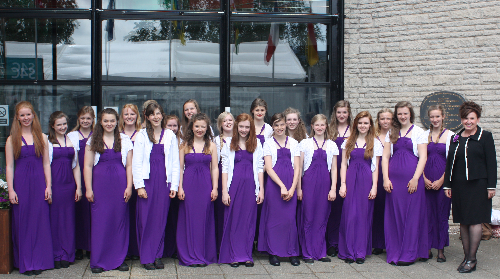 All the girls together outside the Pavilion 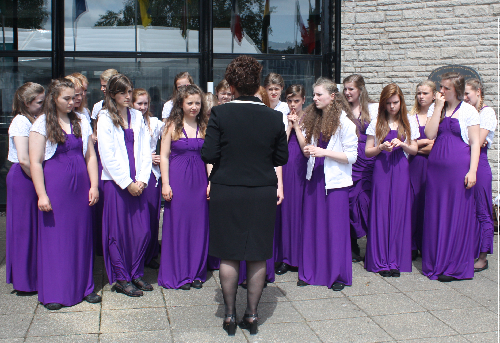 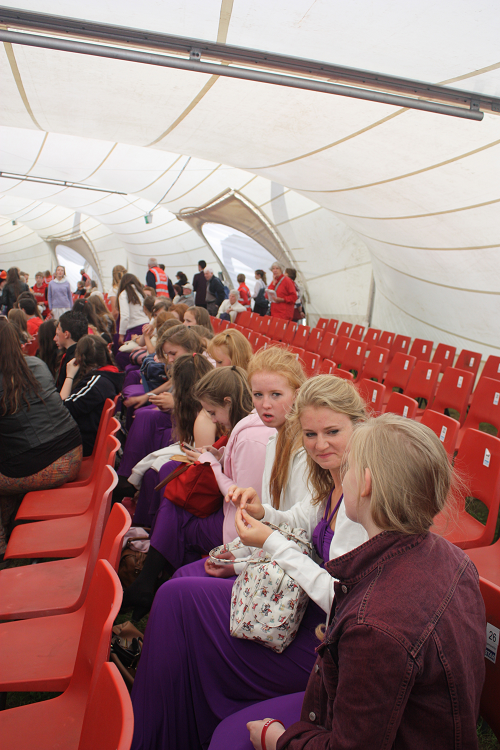 Nervously waiting for the adjudication in the Pavilion 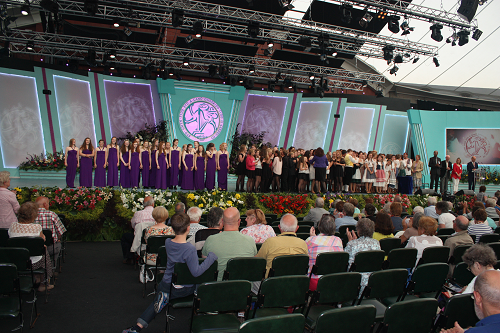 Cantabile join the other prizewinning choirs on the stage 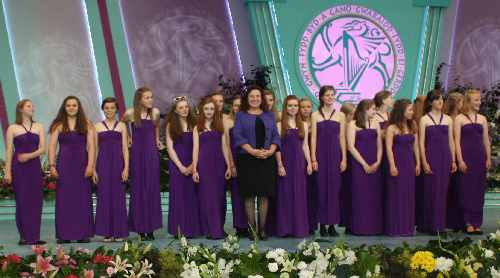 Jo Williamson’s preparations for the Eisteddfod this year followed their usual precise course aided by the newest member of the team from Hereford Cathedral Schools’s Music department, Mrs Cuthbert, joining forces with Mr Lane our accompaniest.

The choir’s hard work was almost scuppered by a contagion of summer colds which left Jess Price, the lead soloist in ‘I got a Robe’, taking a hit for the team and withdrawing from her vocal solo competition to save her voice for the choir entries. Our other two soloists were Rachel Roper in ‘O Waly Waly’ and Charlotte Pawley in ‘A Bunch of Thyme’.

Although no choir to date has won three years in a row, Cantabile gave it their all and despite the strength of the competition won third place in the Children’s Folk Choir. They gained the third highest mark across the three Children’s choir classes for their renditions of ‘A Bunch of Thyme’ and ‘Bobby Shaftoe’.

You can enjoy all the entries at the Llangollen International Eisteddfod website on Llangollen.tv and have fun seeing if you agree with the judges who had some tough choices! You can also glimpse edited clips on the welsh television channel S4/C.

Cantabile didn’t win but we didn’t lose either! As we congratulate our fellow finalists on a hard fought choral battle,  we can be consoled by the truly lovely comments from the Judges  Suzi Digby, Gareth Malone and Laura Mvula that recognised the quality of the singing from the Cantabile girls (and also the beautiful runners up trophy).

Listen to the performances on BBC iplayer and hopefully you will hear both the love and enthusiasm they have for choral singing as well as their technical brilliance which the Judges clearly felt singled them out and provided those ‘Magical Moments’.  Jess Price sang the beautiful solo which anchored their second hymn ‘I Got a Robe’. 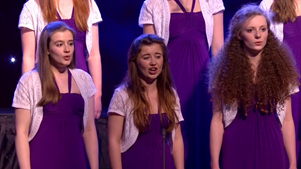 Cantabile Girls have entered the following classes at the Eisteddfod this year:

There is more information about how to attend the Festival and support Cantabile and the other talented singers competing at the official Llangollen International Eisteddfod Festival website.

Our Eisteddfod international success has made it into the local online newspapers.  Check out the story at:

If you spot any other coverage please let us know and we’ll add the links in.

Cantabile were invited to perform a selection of songs on the S4C outdoor stage. They found themselves in a very different kind of competition  – with the broadcasts from the main pavilion! See if you think they managed to keep on track …

The sun was not the sole cause of a mini heat wave today in Wales – the Senior Children’s Choir class was a scorcher! What a great competition full of incredible choirs from all over the world. Cantabile was proud to be part of such a fantastic competition. Eleven, out of the twenty-one Choirs singing their hearts out, had travelled to the UK to compete.

“Wow!” was how the Adjudicator, Ralph Allwood MBE, started his feedback to Cantabile with their performance of the Tiree Love Song with “a wonderful full sound  … very difficult to fault.” He then described their rendition of Dance to your Daddy as a “Tour de Force … effortlessly sung” despite the complexity of the arrangement.

Jo Williamson was delighted to be awarded The Musical Director’s Award which is given by the Eisteddfod’s Music Director, and was inspired in part by the choir’s performance of the Tiree Love Song, arranged by Michael Neaum. 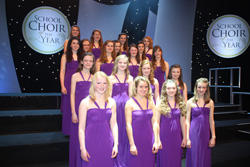