Hereford Cantabile had a ball at Llangollen with two days of singing and socialising, and a trophy to bring home having won the Childrens Folk Choir competition. They were also the highest placed British choir in the Senior Children’s Choir coming fourth to choirs from Canada, the Czech Republic and the USA.

“Well done girls and Laurence and thank you. So proud of you all and many congratulations to our wonderful Canadian friends.”

Their new friends from the St Collen’s Concert – Canadian Shallowly Newfoundland & Labrador Youth – had the winning score for the Senior Childrens Choir class which was the highest score overall and gave them the Choir of the World title too.

Cantabile’s festival started with the fabulous St Collen’s concert where we were treated to two world class performances from the two very different choirs –  both were simply awesome! We also got to see the hoodies for the girls from the HCS PTA for the first time which looked fab.

The opening ceremony and royal visit followed, both full of colour and enthusiastic cheering. Then in the evening the ‘Heart of Llangollen’ Concert had Charlotte and Emily, who are sadly leaving this year, carrying the Union Jack in the Ceremony of Nations. Terry Waite’s following address emphasised the importance of music in creating harmony with ourselves and with our neighbours. Cantabile’s two songs ‘The Butterfly’ and ‘Hava Nagela’ echoed those sentiments beautifully.

Early on Wednesday morning they were the second of fourteen choirs to compete in the Senior Children’s Choir just after 9:00 am. They impressed the judges with ‘The Skylark’ and ‘Johnny Says No!’ commenting they were “technically wonderful … fantastic dynamics and pianissimo …wonderful tuning and flexible singing …”.

Naturally Laurence was superb in both classes but seemed very taken with his role as Johnny!

You can watch highlights from Tuesday and Wednesday on S4C Welsh TV (click ‘S’ on bar for English subtitles):

You can also watch all the choirs’ singing on Llangollen TV.  See if you agree with the difficult decisions the panel of judges had to make!

The scores are all published on the official Llangollen Eisteddfod website:

This year Cantabile are greatly honoured to have been asked to perform in the Heart of Llangollen concert on Tuesday evening which is “a feast of music and dance from the best of the Eisteddfod’s international competitors” and “will also include the official opening ceremony, Procession of Nations and the annual International Message of Peace.”

But that’s not the only event for them on Tuesday  – it will follow the the spectacular opening parade through the town which Cantabile will also be taking part in after their lunchtime concert with Shallaway Newfoundland & Labrador Youth (Canada) in St Collens Church at 1 pm.

It’s a fantastic chance to meet old friends and new and soak up the unique atmosphere that this Welsh international celebration of music creates.

The two clips below show the Cantabile competition performances in 2014:

Due to the generosity of Herefordshire businesses and the wonderful organisation skills of Caroline Mifflin and Maddie Roberts (not to mention the Cantabile parents and helpers too of course) everyone enjoyed a fantastic evening of fundraising for the Nepal Earthquake Disaster Ghachok fund, including the Lord Lieutenant of Herefordshire Lady Darnley.

Following a pre-concert meal courtesy of Pizza Express, Hereford Cathedral School’s Cantabile girls choir performed a wide repertoire of songs which included Gilbert and Sullivan classics, and a preview of their Llangollen Eisteddfod 2015 songs.  The audience at the Left Bank in Hereford gave them a standing ovation at the end of the evening and hopefully the final total raised will be worth a standing ovation for everyone who was involved. 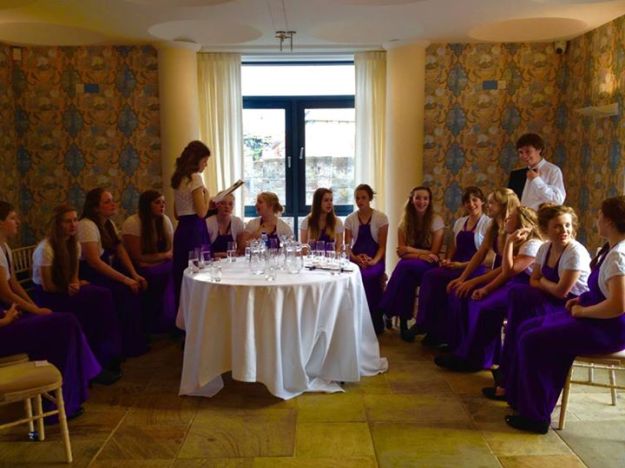 Cantabile and Lawrence relax ahead of the Nepal Earthquake Fundraiser at the Left Bank in Hereford, photo courtesy of Jo Williamson

It’s a date not to be missed and a cause close to the school’s and the girl’s hearts. Please support them if you can.

Hereford Cathedral School has a long standing friendship with the village of Ghachok, in the middle of the Earthquake region, and supported the development of their Shree Sharada School. Many people have lost everything including the means to earn a living.

Cantabile are hoping that they can use their recent success on Songs of Praise to attract support for a concert organised for the 3rd July 2015 at 7 pm by the Hereford Cathedral School’s PTA, at the Left Bank in Hereford.

The tickets are only £15 and include canapés and a glass of Prosecco and can be purchased from the HCS Music School on Castle Street or from Peter Prosser Hairdressing on Church Street, both in Hereford.

There will also be a Silent Auction and draw on the night. 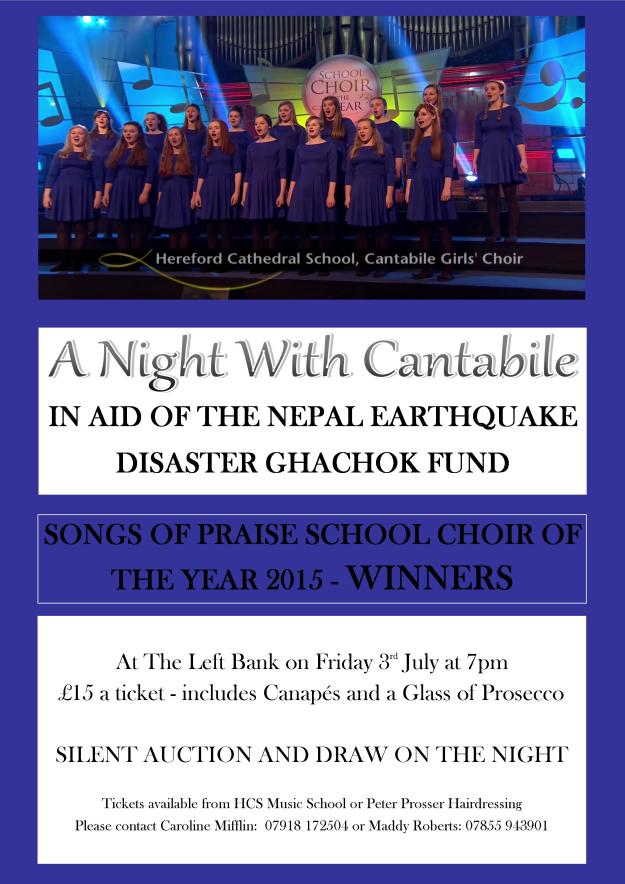 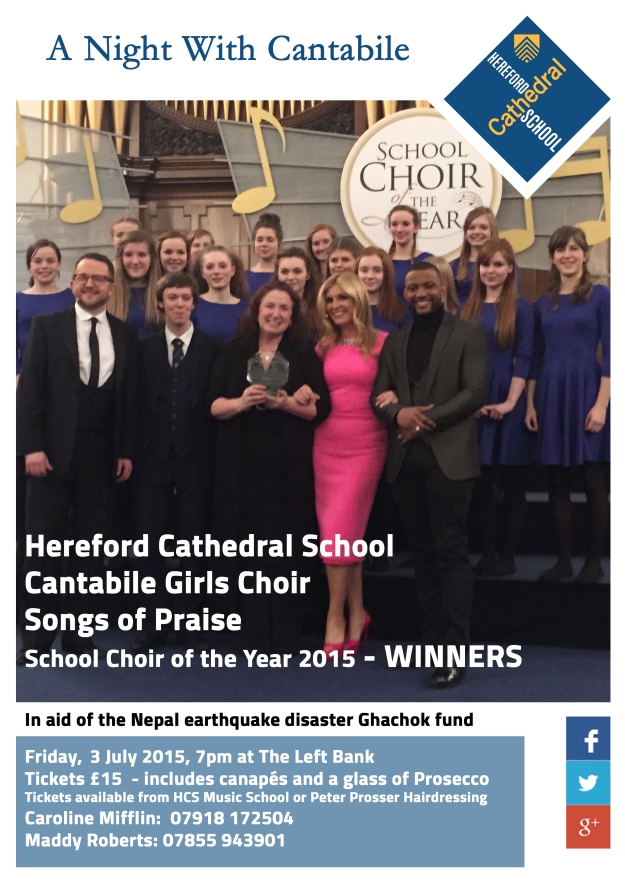 If you can’t make it to the concert then it’s still possible to help by making a donation.

Also read the article in the Hereford Times.

Winning Cantabile with the Judges of BBC Songs of Praise School Choir of the Year 2015, photo Emily Prosser

Hereford Cathedral School, though small, is one of the oldest schools in England, and Herefordshire, though large, one of its most sparsely populated counties.

However, Hereford’s Cantabile Girls Choir have shown that small can be mighty!

1300 years after the likely foundation of the school, girls were welcomed into its fold. A mere forty-two years later, the Cantabile girls have shone – proudly upholding the fantastic musical tradition at the Cathedral and school.

For three years Cantabile have managed to get through to the semi-finals and many of those original girls have gone on to sing with other groups as they’ve left the school. This year the choir absorbed the largest changes yet so the odds were against them. However with the inspiration of Jo they worked together to challenge those odds (and have fun) and the result was the wonderful ‘Skylark’ which they performed in the final and which wowed the three judges. Our two soloists were Charlotte Pawley and Rachel Roper accompanied by Laurence John on the piano.

It was made even sweeter by the presence of Michael Neaum, the composer, in the Songs of Praise audience who heard it performed for the first time and loved it. The Lyricist Digby Haseler wrote the words when he was a soldier in the trenches in the First World War.

During the semi-final and final none of the Choirs are able to hear each other perform so the broadcast is the first time the choir members hear each other. It was a great set of finalists. Although Cantabile, as the winners this year, will be having a break from the competition for awhile, it’s in great hands and we wouldn’t be surprised if our fellow choir finalists this year come back to win it soon – Good Luck! Meanwhile the girls are going to celebrate – with the full support of the Headmaster Mr Smith!

The three judges, Tim Rhys-Evans, Yvie Burnett and JB Gill again made some lovely observations about all the choirs as well as some helpful tips:

The full programme can be seen again on the BBC website for a short period. 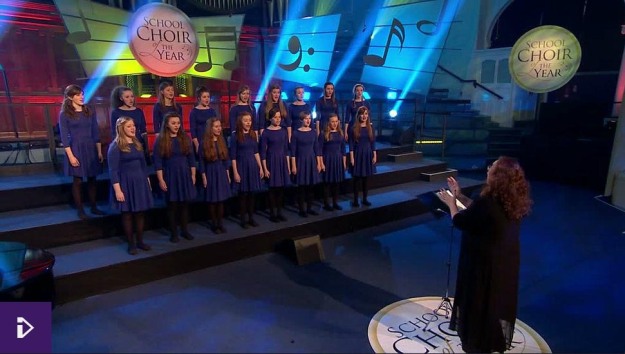 Wow! We’ve made it through to the finals for the second year in a row and against a really strong field of six choirs.

This is a fantastic achievement because each year the choir loses the older girls as they leave the school and Jo Williamson has to remake the mix – blending the new and existing girls’ voices to get a balanced sound. With her inspiration they have worked incredibly hard and it showed in the semi-final on Sunday.

Just to add to the pressure Michael Neaum (the Arranger of the Easter Hymn), was in the Nottingham audience listening to their performance. Both he and Jo have longstanding connections with Nottinghamshire. The competition was filmed in Nottingham’s Albert Hall which is where Jo had her professional singing debut!

We have a brilliant and completely original song lined up for the Final. We used the money we won at the International Eisteddfod at Llangollen to commission Michael Neaum to create a commemoration piece based on on the ‘Skylark’ a poem by Digby Haseler. The poet was a pupil at Hereford Cathedral School and wrote this in the trenches in the First World War.

The Cantabile support team on the day did their bit too and so a big thank you to Laurence John who accompanied them on the piano, Melanie Cuthbert and all the family and supporters of course!

The judges JB Gill, Tim Rhys-Evans and Yvie Burnett were very fair and made some great comments about all the choirs:

See the full programme with all the performances and the judges comments.

Last weekend we saw the Junior semi-finalists of the 2015 BBC Songs of Praise School Choir of the Year whittled down to 3 finalists.

This weekend it’s the turn of the Senior semi-finalists to trill the judges!Cantabile will be singing the Easter Hymn and face stiff competition from the cast of 6 choirs.

The three expert judges they will be facing are Tim Rhys-Evans, Yvie Burnett and JB Gill.

Who will go through to join the junior finalists in the third and final broadcast the following week? Tune in for a treat …

Cantabile Girls Choir together with Mrs Williamson were filmed by the BBC rehearsing for their semi-final performance at the Albert Hall in Nottingham (NG1 5AA) on sunday 15th March 2015.

This is set to be a nail-biting way for all their Mums to spend Mothering Sunday so we wish the Mums of all the choirs taking part as enjoyable a day as possible under the circumstances!

Some free tickets are still available for the Songs of Praise School Choir of the Year 2015 – details on the BBC website.

With their January exams behind them and (some) course work under their belts the Cantabile girls are really looking forward to a singing break in Manchester!

To join them on the 22nd February at 10:30 am buy your tickets from the Royal Northern College of Music website – £10 for adults and £5 for concessions (students, under 18s and senior citizens).

We’d love your support and so would the MACC which is working hard to provide a platform for  youth choirs across the country!

2015 looks set to be an exciting year for the choir.

Fantastically they have reached the semi-final of the BBC Songs of Praise School Choir of the Year for the third year in a row.

For some of the girls this will be their fourth appearance on the show; for others their first but they will all be very thankful for the time and encouragement given by Mrs Williamson, Mr Lane and Mrs Cuthbert to help them achieve this.

The semi-final and finals for the Junior and Senior Choirs will be filmed in Nottingham in March this year and details for free tickets will be published on the BBC website in due course.

In 2015 they would love to replicate their 2014 feat in helping to raise thousands of pounds for local charities at their Concerts at Christchurch in Malvern for ARCOS SMILE and the Military Charities Concert (ABF, TRBLand SSAFA) at Hereford Cathedral with the The British Police Symphony Orchestra. A huge thank you to everyone who helped to make these events such a success.

They are looking forward to sharing the discovery of unfamiliar as well as familiar favourites with their audiences this year. Christmas showed exactly how hard existing and new members have been working to consolidate and extend their already significant repertoire so their audiences will be in for a treat.

Dates to put in your diary for 2015 so far include: